My mother passed away a year ago (93!) but spent the last 25 years of her life living in Delray Beach FL. About 3 years ago I was visiting her and went to the local kosher butcher to do some food shopping for her. I am waiting at the deli counter for my number to get called and who do I bump into but Henry!! I never cease to be amazed at how small of a world we all live in.

I started my own shop in Manhattan in 1979. Everyone at Manny's befriended me--Henry and Stuart, the beautiful blond wives, Ian and Judd and all the guitar sales guys. I will always appreciate the referrals from them. A special memory was when Henry called me one day in the early 80's and told me to come up to the store asap. Awaiting for me was the personal acoustic guitar of Mick Jagger to take back to my shop for repairs.

Thank you Manny's for all your support and… Continue

Yesterday, I was visiting the John Lennon New York Years exhibit at The Rock and Roll Hall of Fame Annex, and when I got to the Springsteen room, there is a little glass case containing a harmonica from in 1974 and.....a MANNY'S HEAVY GUITAR PICK"

kind of like this one of mine only white and really beat up!

In midtown where the suited people were plentiful, you could walk into the store in jeans and feel good about being an artist--even a broke one. I used Manny's in a scene in one of my novels (Family Hangovers). A young woman who lost her band and husband walks off her corporate temporary job and heads to Manny's for her first electric guitar. She's played rhythm for years and this is a big decision to live her own life, play her own riffs. The novel isn't published yet, but I'm keeping Manny's… Continue 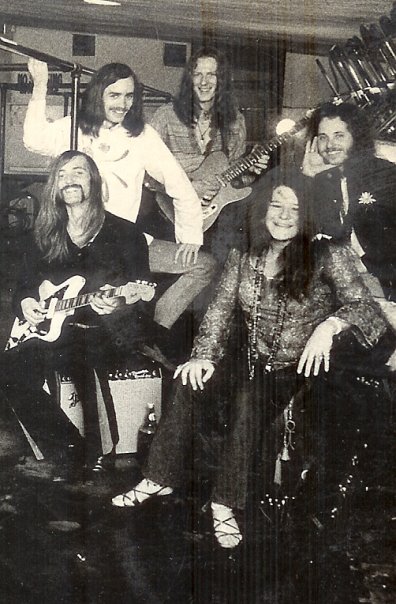 This was sent to us from one of our members. Sam Houston Andrew III, founding member and guitarist and songwriter for Big Brother and the Holding Company. That's him with the white guitar and COOL bell bottoms! This picture is on the wall at Manny's. Thanks Sam!

I just can't believe my ears!! I still am in total shock hearing this bad new. I walk in the doors of Manny's Music after Jimi Hendrix saw my band in Florida in 1970 after Miami Pop Festival and flew us back to NYC to record at the Lady and we got signed to a $1,000,000,000 deal with RCA a month later he was dead. But we were taken to Manny's by Jimi's roadie Brian Stickles and spent over 50,000 grand on gear for the band. it was like a field day for me walking out with everything i needed. 20… Continue

Manny's was THE place back in the day. I got my first serious horn there back in '57

Manny's was THE place back in the day. I got my first serious horn there back in '57 I think it was. A used Reynolds Contempora. Everyone walked through those doors. You could bump into just about anybody. What a gas it was listening to guys doing their scales and chords or whatever as they tried out some new instrument. The center of the music universe for a young aspiring musician.

Really glad the virtual wall was put together. Kudos.

I JUST happened to get an email from my friend Charly Roth who worked at Manny's sometime after we graduated from high school in Princeton, NJ (I'm currently "wedged in the Midwest") and he mentioned that Manny's is closing? All I could think of is how another piece of the city's character will be missing and how really irritating it would be if something generic like a "Baby Gap" sneaks in... Really glad the virtual wall was put together. Kudos.
Andrea Moar-Murphy-Schenck

I worked at Sound City in London in 73, and thought we were cool until a trip to NYC showed me the real deal, I was in awe. Whenever anyone came back from Stateside, the first question was always "d'…

I worked at Sound City in London in 73, and thought we were cool until a trip to NYC showed me the real deal, I was in awe. Whenever anyone came back from Stateside, the first question was always "d'ya go to Manny's?" I still use a leather strap I bought there on that first visit.

I went to The High School of Performing Arts, a couple of blocks away from Manny's and my classmates and I would often go by on lunchtime and bug Danny...Ha!

went to The High School of Performing Arts, a couple of blocks away from Manny's and my classmates and I would often go by on lunchtime and bug Danny...Ha!
My Dad got me my first drum kit there and my photo eventually got up on the wall in the drum department...
Take care,... Read More
Warren Benbo

Sure enough we got on the train from up in the bronx and came to Manny's and were blown away by the depth of the guitars available, experienced staff and the nostalgia even back in the 70's.

I started playing guitar in 1972 and my older peers told me that the only place to get an ax was Manny's. Sure enough we got on the train from up in the bronx and came to Manny's and were blown away by the depth of the guitars available, experienced staff and the nostalgia even back in the 70's. It was a treat to see Jimi's picture and Jimmy Page and Johnny winter, the beatles clapton. I once ran in to Steve Howe in the store. I did buy a few guitars from Manny's over the years.
I work on… Continue

Thank you so much for sharing the great memories. On my first trip to New York (before I moved there) I wanted to see Manny's first and foremost. Before the Empire State Building, Stature of Liberty or anything else. I played the Manny's / Jimmy Maelen Memorial Golf Tournament in Alpine NJ with you guys for many years. A wonderful event - and a wonderful family to be around. And that's what Manny's is...a family, not a store.

From Artie Kornfeld: "....That Dove is the exact one Johnny Cash was playing at the House of Blues when he walked off stage for final Time.I was there,teary eyed"

I oufitted about 10 of my bands there and my Gibson Dovethat I bought the Weekend Lang and I closed with R and R.That Dove is the exact one Johnny Cash was playing at the House of Blues when he walked off stage for final Time.I was there,teary eyed.I loved John
Artie

Henry Gross on my love of Manny's

Manny himself put a guitar in my hands when I stopped in with my mom the very first time. Actually I was looking at a guitar in the window (of the original store which was closer to 6th ave) & he asked if I wanted to try a guitar. It ruined any future medical school prospects!

Over the years Henry was a gentleman and a warm, nurturing spirit. He set up my first Rickenbacker 12 string right after I bought it. I used that guitar on many records including "Shannon". Years later (in… Continue

The sign in the guitar room read, "NO STAIRWAY TO HEAVEN!"

Thanks for your note re "manny's". I sent my son there about 5 years ago and he bought my grandson his first instrument. The kid is now a decent lead-guitar player (in Eugene, Oregon). He reported that he was impressed with a sign posted at Manny's that commanded "NO STAIRWAY TO HEAVEN."

"We loved going in and doing business knowing "We were in the company of the greeats when we gazed at all the autographed photos on the wall of fame!"

I got my first good acoustic from Manny's in 1975. A 1975 Ovation Balladeer model 1112-1. The second one they came out with. Loved that guitar and had it redone recently thanks to saving my Manny's original hand written bill! Professional or amateur, the guys at Manny's took real good care of you and every year I brought my ax back for an adjustment.. no hassle. We loved going in and doing business knowing we were in the company of the greeats when we gazed at all the autographed photos on the… Continue

"In 1967 my dad took me to manny's to buy a farfisa mini-compact organ and an ampeg sb-12 portaflex bass amp. i feel like the music business itself is closing its doors."

My Dad bought me my first electric guitar (a Gibson SG) at Manny's in 1964 . I had just seen Hard Day's Night and knew I didn't want to play acoustic any more. Not when 1000's of screaming teenage girls were chasing these scruffy mop tops around. Sad to think it won't be there any more.

"Many thanks for this wonderful tribute to the best music store in the world!"

I bought several instruments over the years at Manny's Music and simply hung out on 48th St. as a kid just to look in their window. I remember Billy helping me look at potential guitars and all the while saying, "it's all about what you like". I am a professional dog trainer with an ear towards the music. Many thanks for this wonderful tribute to the best music store in the world.

When I was growing up in Princeton NJ, the biggest thrill for me was a Saturday trip to Manhattan to go to Manny's with my Dad. As a 12-year-old in 1967, I loved everything about that trip, with the exception of listening to my father complaining about finding parking next to Jimmy's, across the street from Manny's. I can still remember the SMELL of the new Fender amps in the store! (I lusted for a Deluxe Reverb or even a Bassman amp, and on rare occasions we would leave the store with a new… Continue